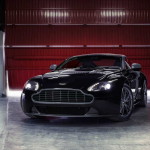 Available in coupe and roadster form, the V8 Vantage N430 has all the same curves and dimensions of a standard V8 Vantage, but adds a slew of menacing dark-themed accents, graphite-painted corners and forged-alloy wheels. The Kevlar and carbon-fiber seats also contribute to creating a general image of a “bad car”.

The name “N430” comes from the powerful 4.7-liter 32-valve V8 front mid-mounted engine that produces 430 horsepower and 361 pound-feet of torque. The engine is paired with either a six-speed manual transmission or a seven-speed SportshiftsII automated transmission with paddle shifter. The N430 can accelerate from 0 to 60 mph in 4.6 seconds and has a top speed of 190 mph.

END_OF_DOCUMENT_TOKEN_TO_BE_REPLACED 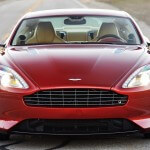 The new 2013 Aston Martin DB9 is a four-seat grand tourer that comes in coupe and convertible (Volante) body forms. The most significant upgrade of DB9 is a new V12 engine. This engine will also be used on the new Vanquish. The 2013 Aston Martin DB9 competes with the Lamborghini Gallardo, Ferrari California, Maserati GT and Bentley Continental GT. First launched in 2004, the new DB9 received now, in addition to the new V12 engine, a freshened styling and a slightly revised interior.

The new 2013 DB9 is built on the Aston Martin’s Generation 4 VH all-aluminum monocoque chassis, that has aluminum body panels with magnesium alloy and carbon-fiber components. The new DB9 looks now more aerodynamic, with an integrated spoiler located in the back. The suspension was optimized for improved handling and includes an active damping system with Sport and Comfort modes. Standard exterior features include 20-inch wheels, bi-xenon headlamps, front and rear parking sensors.

The interior of 2013 Aston Martin DB9 is luxury, with soft leather and high-quality materials that cover nearly every surface. The climate and entertainment system controls were redesigned for greater ease of use. The DB9 offers 2+2 seating and a variety of available trims like mahogany, piano black, Tamo ash and bamboo. The interior features also include a navigation system, heated front seats, power-adjustable seats, Bluetooth connectivity, a premium audio system with 6-CD charger and USB port. A Bang & Olufsen sound system is available.